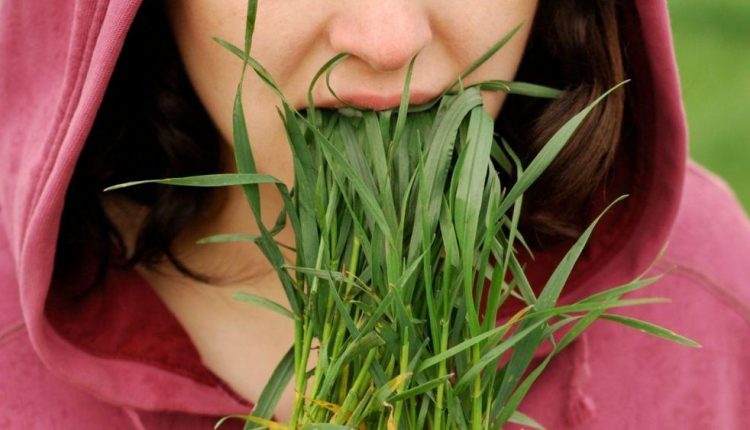 Can humans eat grass and if not, why not?

Are you also wondering if you could really eat weed to survive? After all, many animals eat grass every day and are well fed.

It seems like weed is a great emergency food in a crisis situation. But is that really true?

In this guide, you will learn everything about grass as human food.

Let’s get started and clear up the most important thing right away.

Sure, you wouldn’t just eat grass like a cow. But imagine you haven’t found any food for weeks.

The grass is often still present when no other plants are growing. Would the weed save you in an emergency, or would it be your certain death?

Eating weed in small amounts may not do you any harm. But if you eat more of it, be prepared to get stomach cramps and diarrhoea. Most grasses contain cellulose, which your body cannot digest. Also, grass has little nutritional value for humans.

So: Grass is really not an alternative, even if you can’t find anything else to eat.

Nevertheless, I ask myself: are there exceptions to this rule?

Before I answer that question, I want to address other effects that can occur from eating weed.

The human digestive system is not designed to handle such a high amount of cellulose. Your stomach just can’t convert blades of grass into food.

Would you eat 4 kilos of cabbage a day?

Let’s assume you could successfully digest the weed. Even then, the grass isn’t good food because you’d have to eat a huge amount of it.

Imagine trying to live off the cabbage. It’s almost impossible to eat enough to give your body the calories it needs.

Cows have to eat up to 15 kilos of hay or grass every day just to feed themselves. As a human, you are only a quarter the size of a cow, but 4 kilos of grass – or comparatively cabbage – per day.

Why do ruminants tolerate weed?

Even ruminants like cows have to eat a lot of grass to get full. And these animals have specially designed stomachs that, through the process of rumination, can slowly break down and absorb the nutrients from the grass. Ruminant teeth are constantly growing. Why? Even if you could digest weed, you would soon run out of teeth to chew it on.

The so-called silicic acid in the grass destroys the tooth enamel and your teeth would soon be useless. As a result, ruminant teeth continue to grow to compensate for this abrasion.

Is there any use in boiling the weed?

Cooking vegetables is a great way to make them softer and tastier. Unfortunately, that doesn’t work with weed. Even when you cook weed, the cellulose isn’t broken down enough for a human to eat.

Broccoli, Brussels sprouts, savoy cabbage, you cook them all to make them easier to digest. But if you cook weed – then you have wet weed. Then nothing. Want to roast weed? delicious? No, unfortunately, that doesn’t produce a different result either.

How does weed taste?

Besides the fact that you can’t tolerate it – would you like weed at all?

People who have tried weed claim it tastes just like it smells. It’s a bit dry and crunchy has a texture similar to green vegetables and tastes like earth.

So there’s a flavorful reason why weed isn’t on the human menu, either.

What exactly happens when you do eat weed?

Are you dying to try weed?

Well, the weed will just go through your body and end up looking exactly like you just swallowed it.

Because your digestive system cannot break down the blades of grass and take no nutrients from them. You would simply excrete it completely undigested.

Will you die if you eat grass?

You probably wouldn’t die from a small amount of weed. You may experience abdominal pain, bloating, and diarrhoea.

The raw fibres of the meadow grasses are the reason that the grass is woody and difficult to swallow. Keep in mind that a cow uses her four stomachs and must often ruminate the grass to make it digestible.

It’s not even just the weed itself that you should be concerned about consuming, but the harmful bacteria and microbes that cling to the blades of grass. What likes to cavort in the grass? Animals urinate and defecate in it. Or they roll in it.

Boil the grass seeds and they are edible

If you find grass with seed heads, feel free to collect them as they are edible. But be careful, there are strains that are poisonous when raw. To be safe, boil the seeds before you eat them.

Pay special attention to grass seeds that are purple or black in colour. Because it is very likely a toxic mould that could kill you. The edible grass seeds are brown or green in colour.

What exceptions are there?

Fortunately, there really are exceptions. You can actually eat some wild grasses. The bad news: you probably won’t find these grasses if you’re in a Survival Emergency Situation.

These grasses are edible, you just need to know how to recognize them:

It’s really hard to find edible wild grasses. If you want to be on the safe side, don’t eat grasses at all. Instead, look for other plants that you feel safe with.

Grass is not a good choice to satisfy your hunger. However, where grass grows, you will often find other plants that offer you an alternative.

I have selected a few for you here.

Dandelions are high in nutrients but low in calories. The leaves are slightly bitter, but you can eat them just as well as the whole rest of the plant.

It is one of the most common wild plants in North America and Europe. Dandelions grow in many places, from the tundra to the prairies. It is also found in temperate and tropical regions where it can grow up to 3 meters tall.

In North America, dandelions are eaten as a vegetable or used for medicinal purposes. Dandelion is also used as a folk remedy for liver problems and other diseases affecting the digestive system. The nettle is a perennial herb that grows in temperate zones. It has been used as food and medicine by many cultures.

Their leaves are jagged and have tiny hairs that are sharp and can irritate the skin.

But it is one of the most vitamin-rich foods. Try to only eat the younger plants and dry or cook them first. Also, use their stems to make ropes, nets or slings.

Wild strawberries are a type of fruit that isn’t as hard to find as you might think. They are available in the wild but have a short season.

However, they have a sweeter taste than their cultivated counterparts. Wondering if tree leaves, hay or similar are edible?

So here I want to tell you the answer to similar questions:

Similar to grass, tree leaves are usually rich in cellulose. Aside from being low in calories and nutrients, and often covered in a waxy coating, they’re a poor choice in a survival situation.

Is it advisable to eat wood?

Humans can eat wood, but we don’t have digestive systems designed to handle it. Ruminants, such as beavers, deer or moose, can tolerate bark and wood well due to their specialized multi-chambered stomachs.

I advise against eating grass.

Yes, it’s a shame we humans don’t get along well with weed, as weed is often found in abundance.

But often there are good alternatives that you can find in the wild. Acquire the right knowledge so that you can satisfy your hunger for the rich offer of nature.

7 steps to prepare for emergencies and crises

Testing the Silky BIGBOY – large folding saw for the forest