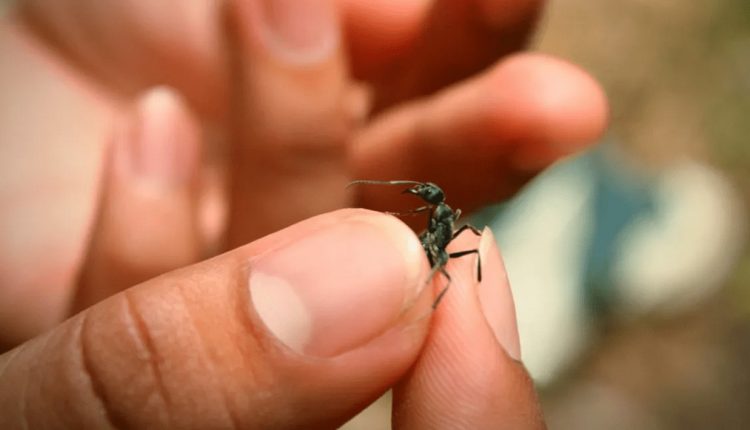 Can you eat ants? Read what to look out for!

Ants are almost everywhere, and when you do encounter them, they tend to be in large colonies.

This begs the question for us survival enthusiasts:

Is it safe to eat ants?

Ants might not be your first choice, but when it comes to life and death, you’re grateful to have the opportunity. Ants are high in protein and other important nutrients that are essential in a survival situation.

The protein content per 100 grams is often higher than that of our conventional boiled eggs.

Indigenous peoples also recognized this superfood as a food source and fed on ants several centuries ago.

It is advisable to keep this food option in mind. A resource-poor place can turn out to be a real feast.

Before you reach for the next anthill without thinking, you should read the following guide carefully.

History: Ants have been eaten before

Ants have been collected by indigenous peoples from North America as a snack between meals. The ants were considered a delicacy and luxury because of their sour taste. In addition, ants mixed with other insects were offered as desserts.

However, it has also been documented that insects are used as survival food in certain tribes during difficult times. Exactly what we are looking for here! The animals were often roasted beforehand in order to keep them for later use.

What species of ants were consumed in North America is not known. It can be assumed that different species of garden ants were on the menu.

Due to the high availability of ants, we can assume that ants were not only used in the indigenous cultures of North America.

Ants are at home on every continent (except Antarctica) and can even be found all year round. While it takes a bit more practice to track them down in the winter, it’s almost impossible not to spot ants in the wild in the warmer months.

For every 100 grams of ants, there are about 14 grams of protein and 5.6 milligrams of iron. In addition, there are other essential nutrients such as fats, calcium and fibre.

Keep in mind the weight of a single ant. Depending on the species, between 300 and 400 ants weigh one gram.

The taste of the ant is sour, and tangy and can even contain citrus notes.

This can be traced back to the formic acid that occurs naturally in animals. The acid can be neutralized by cooking. When it comes to taste, it always depends on the type and preparation.

In Colombia, the leafcutter ant is said to have an aphrodisiac effect. Here the animal is also given as a wedding gift in certain circles.

Where can I find the treats?

As mentioned above, you can find ants almost everywhere. Unless you’re in Antarctica, chances are you’ll be feeding on ants.

Move through the terrain while keeping your eyes on the ground. Can you see individual ants or maybe even an ant trail?

That’s a good sign. The best thing to do now is to follow the ants that are carrying something. The best chance of success here is that this ant runs back to the colony.

You will easily recognize the colony. There will be plenty going on there and if there is no hill then at least holes. There the ants will disappear and come back to the surface.

At least several hundred ants live here. If it is a super colony, several million animals can live here. Like in a big city!

You can already practice searching for an ant colony on your next visit to the forest. This also trains your mindfulness and it is a pleasure to watch the ants in their daily activities.

Now it is time to collect the six-legged animals. To do this, you must draw the attention of the colony to you and disrupt the ants in their everyday lives.

Ideally, you take a stick and poke one of the holes. Start with a hole and see what happens.

The dwellers will try to attack the attacker, in this case, the stick. This is your chance to pack the ants into a container you prepared.

Repeat this process until you have enough food. In an emergency, you can also continue digging in the colony and harvesting the ants’ eggs. These are also edible and provide you with plenty of nutrients.

Be careful when catching and eating

If you invade the territory of an ant colony and then disturb their peace, you should prepare for combative attackers.

Ants can bite and in most cases also give off the poison. This can be a small sting in some species, but it can also really hurt and also leaves a memory of this meeting for several days. I speak from experience!

Hence the first tip: Do not choose ants known to be aggressive!

Although you will not encounter any seriously dangerous ants in most areas, you should avoid the red wood ant in particular when searching for food.

This species is far more aggressive and possesses a venom gland. She sprays the poison on the bite wound, which then swells.

Short anecdote: wood ants can even drag smaller mammals, like a mouse, to the burrow.

If you are not sure which species of ant you are dealing with, you can trust your senses.

Striking colours or a pungent odour are to be understood as warning signals. Unless you’re starving, you’d better mess with another colony.

Next, I would advise against eating dead ants. You don’t know why and how long the animals are dead. Only collect live animals to avoid risk.

You should also avoid ants near a city. In a survival situation, you’ll probably be in deep nature, but it’s a well-known fact that it’s better to be safe than sorry.

Ants near cities often face poison due to their pest status. The ants could accordingly be contaminated with it. Boiling doesn’t help anymore. Therefore, pay attention to your surroundings when collecting.

Finally, I would like to point out potential allergic reactions: Along with shellfish, dust mites or even chocolate allergies, you could react to insects with corresponding symptoms.

If you still want to take the risk, you should definitely cook your yield. Like all foods, ants can lead to allergies, which in the worst case can quickly end your survival adventure.

I strongly recommend that you boil ants beforehand. Anything meaty, like Fish or insects, should ALWAYS be boiled!

You can eat ants raw, but on the one hand, the intense taste is somewhat softened by the cooking process. On the other hand, and much more important, is the killing of bacteria, parasites and viruses in and on the ant.

On the other hand, there is high nutrient retention, which is given with raw consumption. Therefore, you should be careful when cooking. The ants are tiny, so they don’t really need long cooking or cooking times.

In any case, I would advise against eating live ants. In the worst case, ants can bite you in the stomach on the way and a swollen bite in your neck region is by no means pleasant!

It tells the story of a 62-year-old Australian who is stranded in the outback and without water after suffering a heart attack. He survived on ants as emergency food and was rescued after a week.

Another story is told about a pilot in World War II. He was shot down and broke both his legs in the fall. He survived only because he was able to dig up a frozen anthill and feed on it. He dragged himself to the next village and was cared for there.

As you can see, ants are a great backup plan. Due to its wide distribution and frequency, you will find it almost everywhere.

In many parts of the world, animals are even considered a delicacy. Maybe you’ll get a taste too. While you can consume the animals raw, you should make the effort of cooking large quantities to kill off unwanted passengers.

Be careful when dealing with the little animals, one wrong step and your leg become a target. You should also be aware that these are living beings. Always treat them with respect!

The more you acquire such knowledge, the safer you will feel in the wild and be able to react much calmer in extreme situations.

How do you pack your escape backpack optimally – 9 tips

Is it ever too late to prepare for a crisis?