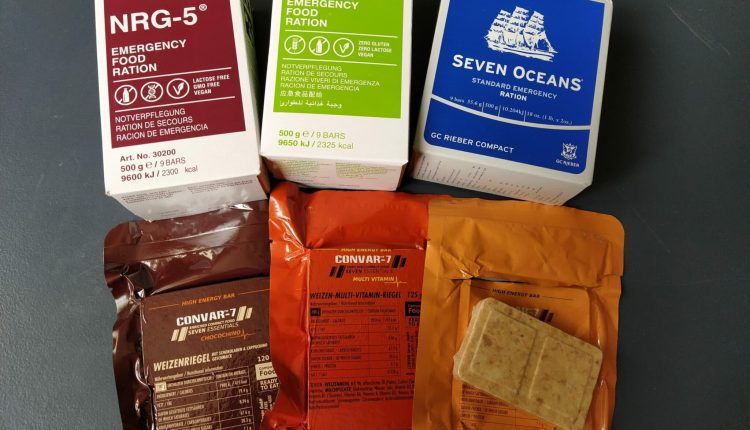 Almost 7 years ago, days for the day, I was testing and comparing for you BP-5, NRG-5, and UN and NATO emergency rations.

Today, I offer you a new comparative test of 4 other survival rations.

We have in this article, in competition:

For me, the NRG-5 Emergency food ration distributed by MSI is still the reference.

With a top weight/energy ratio and exceptional longevity, it’s really my favourite.

Moreover, the 20 years displayed are for informational (and legal) purposes because I am sure that well stored in good condition, the rations can last much longer.

The advantage is that you eat it as it is, straight out of the box or crumbled into a porridge in cold or hot water.

It is lactose-free, GMO-free and vegan.

This is also one of the only changes we can see by comparing the new box with the one from 7 years ago, the word VEGAN is written on the front of the packaging (at least that is clear and up to date).

Often it was criticized for being a bit stuffy or bland…

Afterwards, we are on the emergency ration and not haute cuisine!

I already had the Seven OceanS ration in my hands but I don’t think I presented it to you.

It is a little cheaper, and provides a little more Kcal for the same weight (2402 Kcal) but with a lifespan 4 times shorter (announced at 5 years against 20 at NRG-5).

This is what will tip the balance because, in terms of taste, presentation and tasting, we are on substantially the same product.

We can still note variations in the composition and in particular in the proteins which are more present in NRG-5 while the Seven Oceans rely on carbohydrates and lipids.

A newcomer to the range is the NRG-5 Zero, in addition to being 100% vegan, it is made from rice and therefore contains no trace of gluten.

Very interesting for the intolerant (gluten I speak).

The performance level is very very similar to the “normal” version, the only variant (apart from the absence of gluten) is the shelf life which goes from 20 to 15 years.

Level taste and preparation we take the same and we start again.

To differentiate them, the Gluten-free box is green, otherwise nothing new.

The range of CONVAR-7 survival rations

Well, here we are on real novelty.

We can say that they tried to gain market share on taste and it is on the right track.

Already, it looks different, we no longer have cardboard packaging but directly the vacuum-packed product.

Convar-7 bet on the taste, but inevitably that impacts the composition.

They explode the carbohydrate level meter to the detriment of proteins which are halved in comparison with NRG-5.

Who says more taste says more sugar? They also have gluten and milk.

They can also be kept for 20 years.

Once you know all that you can really decide when you taste the product, it’s really better, you can even say it’s good.

They exist in multi-vitamin, chocolate and peanut versions. These are my favourite!

Where to buy these survival rations?

Online shops like Amazon offer a very wide choice of compact food rations. They are generally compact, practical to carry and prepare, and compatible with emergency situations.

And so, in conclusion?

And suddenly I remain a big fan of NRG-5 I consume it from time to time but I admit that the discovery of CONVAR-7 does not leave me unmoved.

The practical and compact format, the taste and the energy performance put them at the top of the basket (literally and figuratively).

With this type of product, the brand is directly targeting the emergency sector, but also hikers or trekkers (for a snack or breakfast) and even individuals who may have a significant and rapid need for energy without having the opportunity to sit down to eat.

I am thinking of bicycle couriers for example.

It’s a top product to put in the car too or even at the bottom of a bag.

Why do people wear long, black clothes in the desert?

MRE 12 and 24 Rations Test: Presentation, Taste, Use… and my opinion