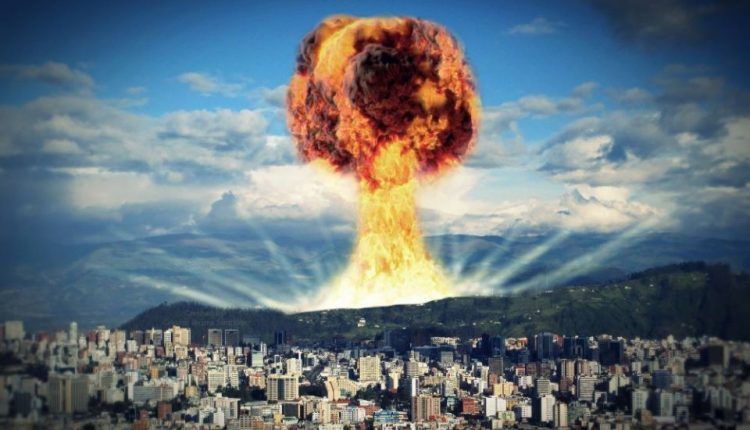 How do you act in a nuclear explosion?

Assuming an emergency occurs and a nuclear bomb should actually explode, the explosion proceeds in different steps.

Everything within about a mile will likely be destroyed first.

In the first 15 seconds after the massive explosion that destroys everything in the vicinity, a massive fireball rises into the sky, sweeping away debris and dirt.

After the fireball rises, you have about fifteen minutes to take cover.

Because when the radioactive dirt falls back to earth, it irradiates everything it comes in contact with. Therefore, one should find shelter in a safe hiding place if possible.

Radiation is deadly not only in high doses. Because even rather small amounts of radiation can lead to blisters on the skin, which damage the bone marrow and attack internal organs. Secondary diseases such as leukaemia can also be caused by radioactive radiation.

The more layers of concrete and masonry now protect against radioactivity, the better.

Possible quickly available hiding places are the lower floors of old buildings or basements and subway stations. If you have been infected with dangerous radiation, medical help must be found as quickly as possible.

A countermeasure, for example, is the pigment Prussian blue, which is administered orally and can help the radiation leave the body again.

You should also wash as soon as possible and take off the radioactively contaminated clothing.

A symptom of dangerous radiation poisoning is that the person concerned throws up violently. Because the body reacts very quickly to radioactive radiation.

For the first hour after the explosion, you should continue to seek shelter in hiding.

The radiation from the atomic bomb decays relatively quickly and steadily decreases, after 24 hours the radioactive dust has already lost 80 percent of its energy.

If you’re lucky, you weren’t exposed to the radiation for too long and you don’t have to expect long-term effects.

Disarmament is the best protection against an atomic bomb

Very few people would survive an atomic bomb and even fewer would escape without long-term consequences.

Even with the best preparation, surviving unscathed is very unlikely. The Hiroshima bomb, for example, wiped out all life within a kilometre radius.

However, today’s modern atomic bombs are thousands of times more powerful and their explosions are much more devastating than was the case with the Hiroshima bomb.

Therefore, the best and only protection against a tragedy of this magnitude is that another nuclear bomb is never dropped.